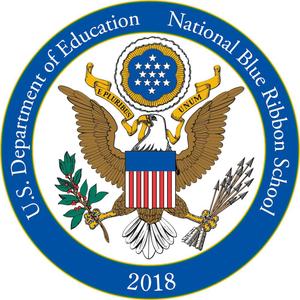 McAllen ISD has done it again!

Houston Elementary School has been nominated for a prestigious national award – the Blue Ribbon – it was announced by the Texas Education Agency today.

Only 26 schools in Texas were nominated. Typically, only a few hundred earn nominations nationally.

Houston was nominated as an Exemplary High-Performing School.

“This is a tremendous honor,” McAllen ISD Superintendent J.A. Gonzalez, Ed.D., said as he congratulated the Houston staff in the school library. “I’ve been with this district for 21 years and I can tell you that this is one of my proudest moments. This school deserves a national recognition because you work hard day in and day out. You earned it. You have sustained a legacy of excellence because this school has been doing it for a long time.”

“Every single person had a piece in it; we should all rejoice,” the nine-year principal said. “I feel like this is my proudest career moment. It’s the culmination of a lifetime in education. (The nomination) is a combination of determination, hard work and knowing our kids have to succeed. No matter how much extra work it takes, we're going to do it.”

Founded in 1982, Blue Ribbon Schools is a U.S. Department of Education program that recognizes public and private elementary, middle, and high schools where students perform at very high levels or where exemplary progress has been made toward closing achievement gaps among subpopulations while also maintaining high achievement levels among all students.

Nominated schools must now complete a rigorous application process through the US Department of Education. Announcements of the national award winners will be made in September. Schools that receive the award will be recognized at the Blue Ribbon Schools awards ceremony in Washington, D.C.